What happens when games end?

At the conclusion of each game, pitch counts, rest, and availability are finalized and automated reporting is initiated. 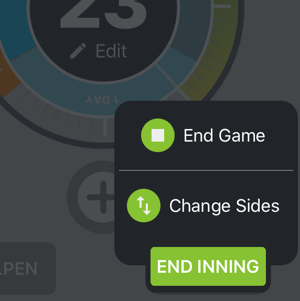 After the final out of a game is recorded and pitch count trackers for each team (assuming both teams are using ChangeUp)  select "End Game" from the END INNING menu, the following occurs:

Note: Any games on the schedule that are started (and have associated pitch counts) and not marked for completion by coaches will be automatically ended at the pitch count entry deadline (default is 12:00 PM the day after a game), with the pitch counts for the Home team used to determine rest and availability.  Games that are canceled, postponed or need to be completed on another day can be rescheduled directly within ChangeUp.