How Is Compliance With Pitch Count Rules Monitored and Reported?

ChangeUp tracks pitch count rule compliance. League or tournament pitching availability is updated in real-time and accessible in the app and customer portal. 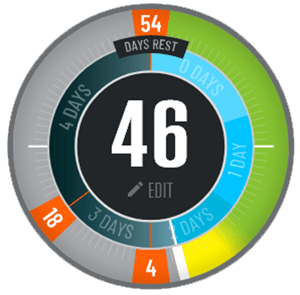 ChangeUp comes with pitch count rules for many of the leading baseball organizations in the world across multiple levels preconfigured, including International Little League and the National Federation of State High School Associations (NFHS), with additional rules easily added via its web-based administration console.

As in-game pitch counts are logged via the ChangeUp mobile application they are continuously evaluated against all applicable rules and restrictions, with feedback regarding the number of pitches remaining until a pitcher reaches an individual day of rest threshold or the maximum number of pitches allowed provided in real-time.

A Day of Rest Threshold is a set number of pitches that, when reached, translates to a required (or recommended, depending on the rule) day of calendar rest before a pitcher can next pitch in a game.  Most pitch count rules contain multiple day of rest thresholds leading up to the maximum number pitches that can be thrown in an individual outing before the pitcher must be removed from a game.

Once a game is completed via the End Game feature, including any reconciliation of counts required across opposing teams, pitch counts and required days of rest are finalized and pitcher availability is updated accordingly within the ChangeUp platform, and a game summary report is generated and made available to all coaches associated with the teams involved in the game as well as any league or tournament administrators that have requested to receive game reports for either team (or for the league/tournament).  Should a discrepancy in pitch counts exist at the conclusion of a game that cannot be resolved by the opposing coaches by 11:59 PM PST on the day of the game, pitch counts recorded by the HOME team will be established as the final counts of record and will be used in determining days of rest and availability, after which game summary reports will be created and distributed.

League-wide availability reports are available in real-time within the reporting tab of the mobile app as well as the ChangeUp Customer portal.

Game Summary Reports are created upon the completion of games and include the following information for each participating team:

League-wide Availability Reports identify which players are ineligible at any point in time.  Availability reports are created by League level on a nightly basis and contain the following information: